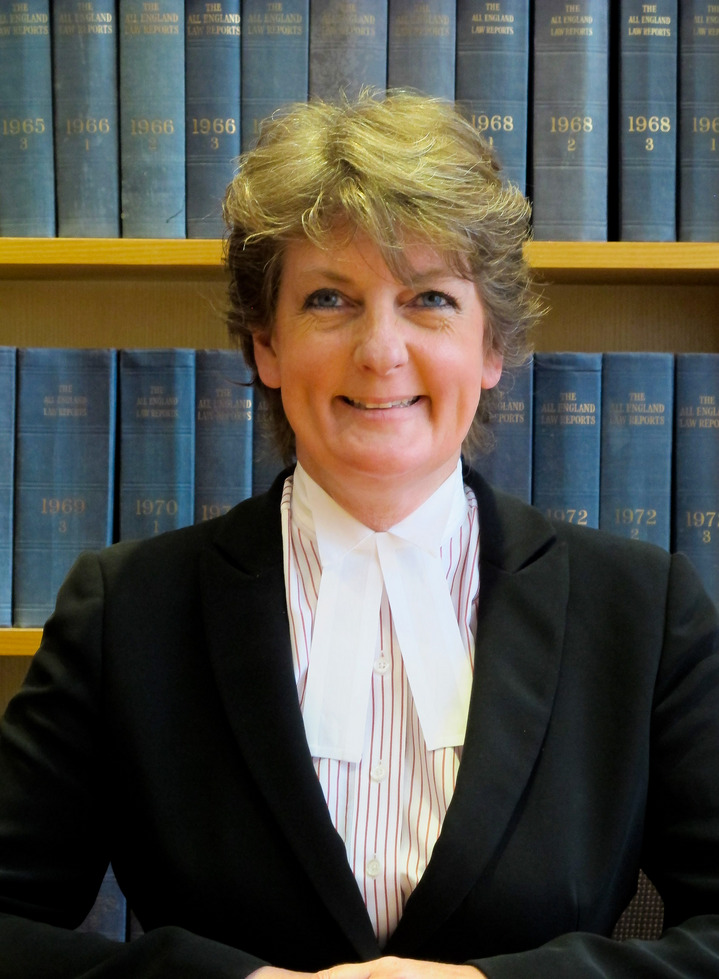 "Charlotte Draycott SC of Central Chambers maintains a comprehensive criminal practice, a substantial proportion of which is dedicated to such issues as commercial fraud, bribery and corruption, insider trading and money laundering. Interviewees characterise her variously as "very, very clever and as tough as nails," a "formidable but very fair opponent" and a "brilliant cross-examiner." She successfully represented a Hong Kong businessman accused of conspiracy to commit money laundering, it being clearly demonstrated during the proceedings that the assets concerned were legitimate earnings."

Charlotte Draycott SC was a founder member of Central Chambers when it was established in 1990 and has been Head since 2007.

She specialises in criminal law and has the distinction of being the only female Senior Counsel to do so. She was the first European woman in Silk and the only one in practice. Hong Kong has been her home for 31 years and she is married to a former High Court Judge, now retired.

She has frequently and successfully represented professional people who, acting under extreme stress, have committed crimes totally out of character.

She takes pride in offering sympathetic but firm and practical help and advice to those who need it both in and out of the spotlight.
​​
She has conducted a number of cases in involving issues of Legal Professional Privilege for both prosecution and defence and has become a specialist in this field.

Recent cases in which she has been instructed have included murder, rape, triad related matters, child pornography, drugs offences, robbery, offences against the person, theft, bookmaking, forgery, public disorder and road traffic as well as the areas mentioned above.

She has wide experience of appeal work at all levels.

She is a member of the Criminal Procedure Rules Committee.

She was an Advisory Editor of Hong Kong Archbold from its inception.

She is panel member of the Higher Rights Assessment Board​​.

She is a member of the Criminal Legal Aid Review Committee​​

HKSAR Jack Chen Keen, May Wang aka May Hao and Eric Yee WenJie

Miss Draycott finally brought this prosecution to a successful conclusion in 2016 after a battle spanning 4 years.  A prolonged Preliminary Inquiry resulted in the successful transfer of the case to the High Court where the defendants stood trial between October 2015 and April 2016. All 3 were convicted. Jack Chen was sentenced to 7 years and 9 months imprisonment, May Wang 8 years and 3 months imprisonment and Eric Yee to 5 years.

The case involved the CraFarms Group of Farm Companies in New Zealand where  the fraud is notorious.

Jack Chen and May Wang acted together to defraud the SEHK and the Listed Company New Zealand Natural Dairy Ltd. May Wang posed as the vendor of the farms, which she did not own, whilst Jack Chen maneuvered his way onto the Board of Directors of the listed company. They pretended to be independent of each other whilst persuading the Listed Company to purchase the farms from May Wang, using money raised by the sale of the company’s convertible notes. Eric Yee prepared false accounts for the farms at the direction of May Wang to deceive the shareholders of the listed company so that they would approve the purchase. Hundreds of millions of dollars were raised by the sale of the notes, some of which Chen and Wang used to buy luxurious properties in Auckland.

The case involved close scrutiny and interpretation of the Hong Kong Listing Rules and meticulous examination of the false accounts. It again involved issues of Legal Professional Privilege claimed by defendants over documents seized in lawful searches.

Evidence of witnesses reluctant to travel to Hong Kong was collected in the New Zealand High Court on Letters of Request on 2 occasions.

Their appeals to the Court of Appeal were unsuccessful.

A case much reported in the media in which Mr Tse’s co-accused Chau Hoi Leung Henry, murdered and dismembered his parents in Mr Tse’s flat and kept their body parts in refrigerators  there. Mr Tse, represented by Miss Draycott, was acquitted against all odds, although he had confessed to the killing under great pressure from the police. He pleaded guilty to helping to dispose of some of the body parts because Chau had threatened his mother. He was granted his immediate release from custody into the arms of his sister who had given evidence in his support. He was a childlike and trusting character of low intellect, who had been cruelly used by a man he took to be a friend. He was fortunate to have finally found justice at the conclusion of his trial.

A case involving the assertion of Legal Professional Privilege by the company over documents seized by the SFC and handed to the Secretary for Justice. Miss Draycott represented the Government and the Police in this landmark case concerning Legal Professional Privilege which has marked a welcome departure for Hong Kong Law from the overly rigid application of the law in the United Kingdom case of Three Rivers No 5.

Miss Draycott has represented the Securities and Futures Commission in disciplinary proceedings brought by the Takeovers and Mergers Panel against Wong Yuk Kwan and others. The case concerned the purchase of oil fields by Pearl Oriental Oil Ltd and the redistribution of shares consequent upon the acquisition.

HKSAR v Shum Chiu (HKSAR v Wong Hung Ki & Another)
After a long battle through all levels of the courts in Hong Kong, the proceedings in this case were successfully stayed as a result breach of Legal Professional Privilege by the ICAC. The ICAC had covertly recorded a defendant in consultation with his solicitor. The Court of Appeal held that on the facts the ICAC were guilty of failure on a fundamental issue which could not be countenanced in the case of a law enforcement authority operating in a society governed by the rule of law. Further that there had been an abuse of the process which was an affront to the conscience of the court to which the court should not lend itself by permitting the case to continue.

Luk Thiet Thuan v R (1997) AC 131
In this case, the Privy Council was asked to consider the test for provocation and the relationship between that defence and diminished responsibility in cases of murder. Miss Draycott proposed that where a person suffered from an abnormality of mind that fact should be taken into account when judging whether he had been provoked into killing the deceased. This interpretation is now the law in the UK although not in Hong Kong. As a result of this judgment the provocative words that incensed the accused no longer need to be directed at a particular characteristic of the accused for that characteristic to be considered in his favour.

HKSAR v Lee Fung Yee
Miss Draycott conducted a successful appeal against sentence for a woman who had killed two of her children whilst under the influence of a Temple Master who claimed to be able to speak to the Goddess of Mercy. As a young girl she had been duped into believing that relations with the Temple Master were necessary for her good health. When she became pregnant she ran away from home. She bore the Temple Master three children, one of whom he took from her to be raised by another woman. When she discovered that he was a fraudster who preyed on vulnerable women, she attempted suicide with her remaining children by burning charcoal. When she awoke in the morning her children were dead. Her sentence was reduced from 7 years to 4 years.

HKSAR v Yung Ka Tim
Miss Draycott conducted a successful appeal against conviction. The defendant was prosecuted by the ICAC as a coconspirator of Mr Derek Wong Chong Kwong. The case led to the prosecution of barrister Mr Kevin Egan and solicitor Mr Andrew Lam for conspiring to prevent a witness from co-operating with the investigating authority. The conviction was overturned and Mr Yung was released from custody.

HKSAR v Li Man Tak
This case concerned covert listening to the defendant’s telephone calls by the ICAC. The invasion of the defendant’s right to privacy exposed by the defence team was a factor in prompting the enactment of the Interception of Communication and Surveillance Ordinance CAP 589.

HKSAR v Jocelyn-rivera
The successful defence of a woman accused of masterminding the chopping of a bystander at the Hong Kong Rugby Sevens.

PP v Y.A.M.P.I.W. Pg. Dr. Hj. Ismail​​
In 2010 Miss Draycott was admitted to the Bar of Brunei to act as Senior Counsel for the Government of Brunei in a high profile appeal. The Minister of Development had been convicted of accepting bribes over many years from a construction company and had favoured the company in assigning contracts for the provision of public housing. The Minster’s appeal was dismissed.​

HKSAR v Ng Sik Kei
The successful prosecution of two senior ranking members of the 14K for ordering a fatal attack on Ho Wai Ha, a newspaper vendor when she refused to take extra newspapers from their company. The two defendants had summoned lower ranking members of the triad, treated them to a night out with massage and a meal and then ordered them to attack her with beef knives when she arrived for work alone at 5am.
In his appeal Mr Ng once again asserted his authority to summon triad inmates of the prison system to give false evidence to discredit the prosecution witnesses but his attempt to overturn his conviction failed.

HKSAR v Lee Wan Kong
​The successful prosecution of members of the Wo Shing Wo triad society responsible for the murder of “Tai Lung” a prominent member and Red Pole fighter of the Sun Yee On triad society at the Shangri La Kowloon Hotel forecourt. The defendants drove a seven seater vehicle into Lee Tai Lung as he alighted from his Mercedes with his body guard and two women friends, in the small hours of 4th August 2009. They leapt from their vehicle and chopped his unconscious body so that he bled to death.

HKSAR v Du Jun
The successful prosecution of a former Managing Director of Morgan Stanley for insider trading in the shares of CITIC Resources Holdings Ltd to the tune of HK$42,000,000. Conviction upheld on appeal.

HKSAR v Hui Yat Sing
The successful prosecution of the largest money laundering case in Hong Kong history involving HK$6,000,000,000 stolen from the Bank of China in Kaiping. One of the bank managers who had stolen the money from their bank, was in custody in the PRC and could give relevant evidence. Miss Draycott instigated the collection of that evidence on a Letter of Request in the PRC which had never been attempted before. This case has since been used as a precedent and such evidence is now routinely made available.

HKSAR v Philip Wong Chi Wai
The successful prosecution of a practising Member of the Bar for attempting to pervert the course of justice. The case involved refuting the assertion of complex claims to Legal Professional Privilege. The conviction was upheld on appeal but overturned in the Court of Final Appeal.